Based on the novel Un crime by Georges Bernanos

With the support of King’s Fountain 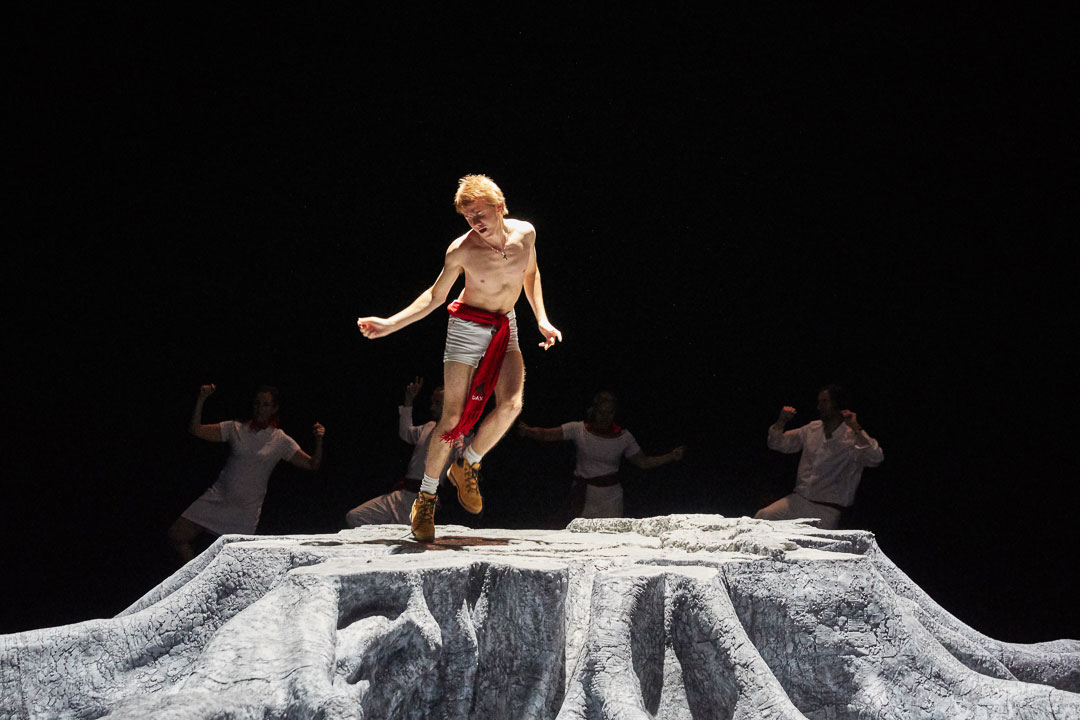 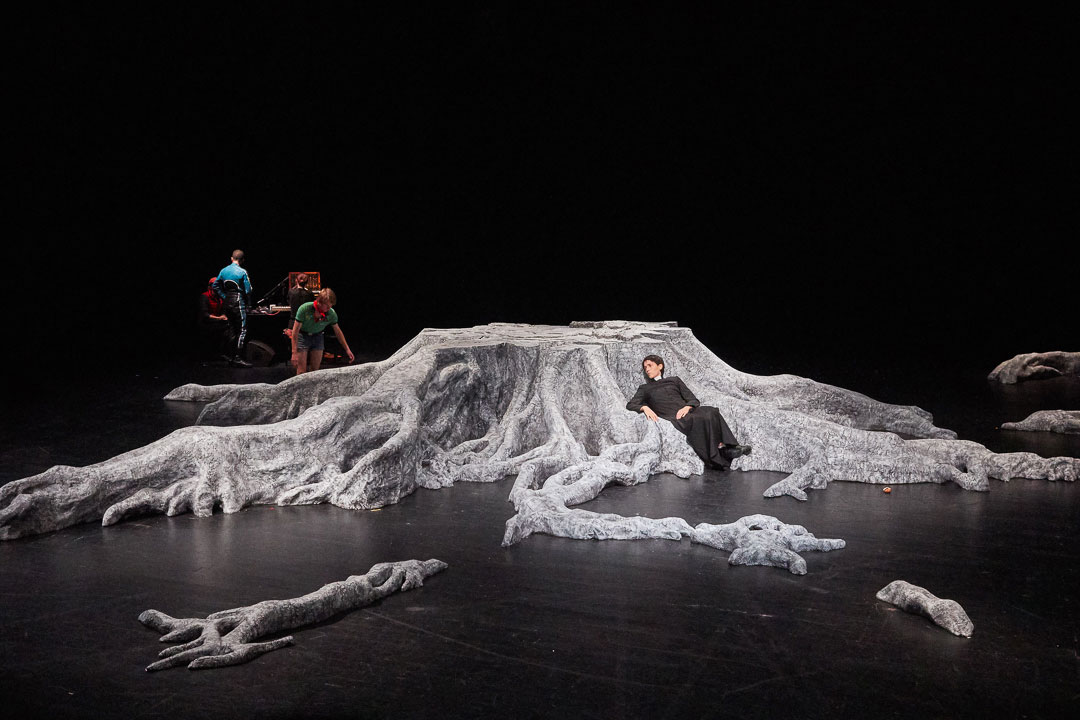 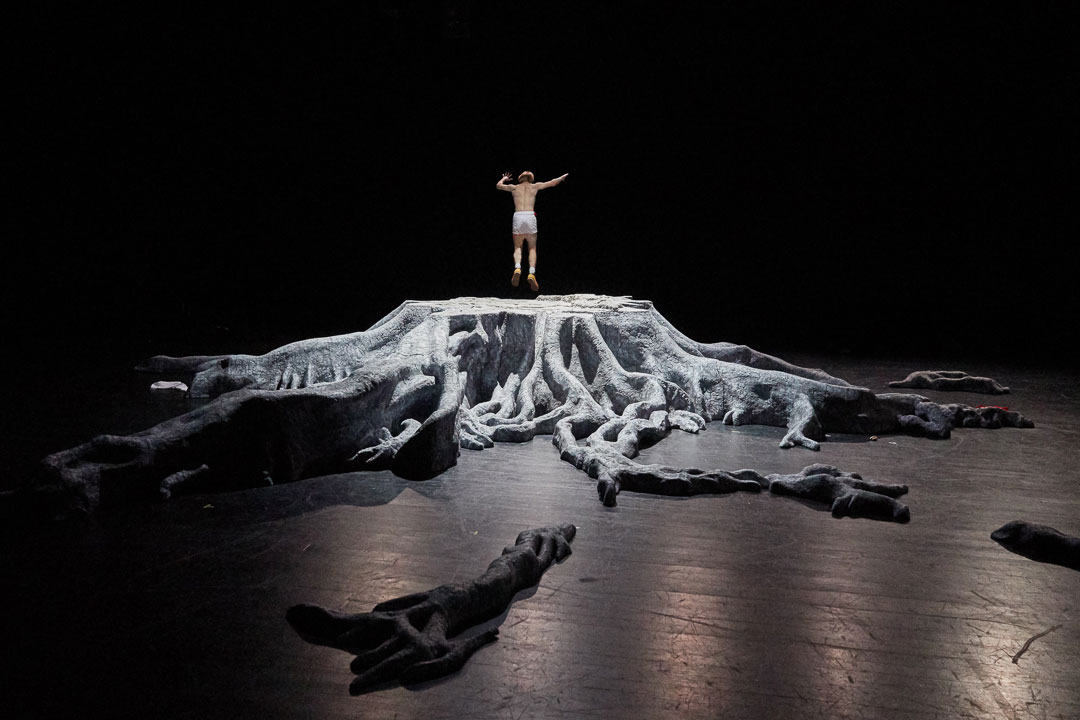 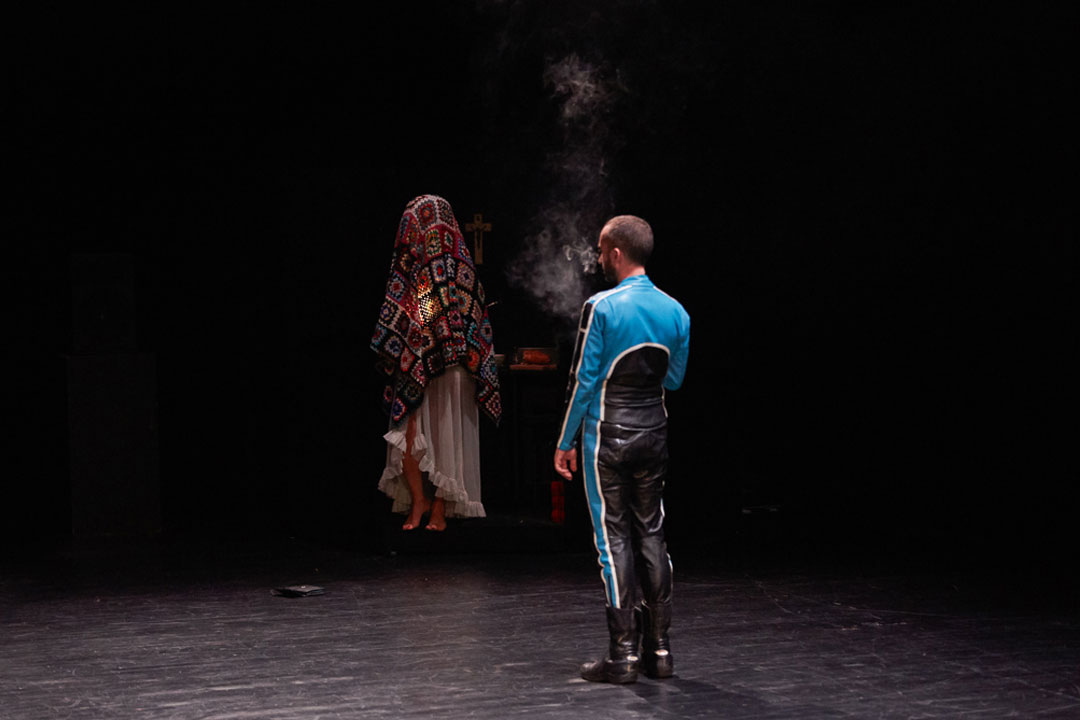 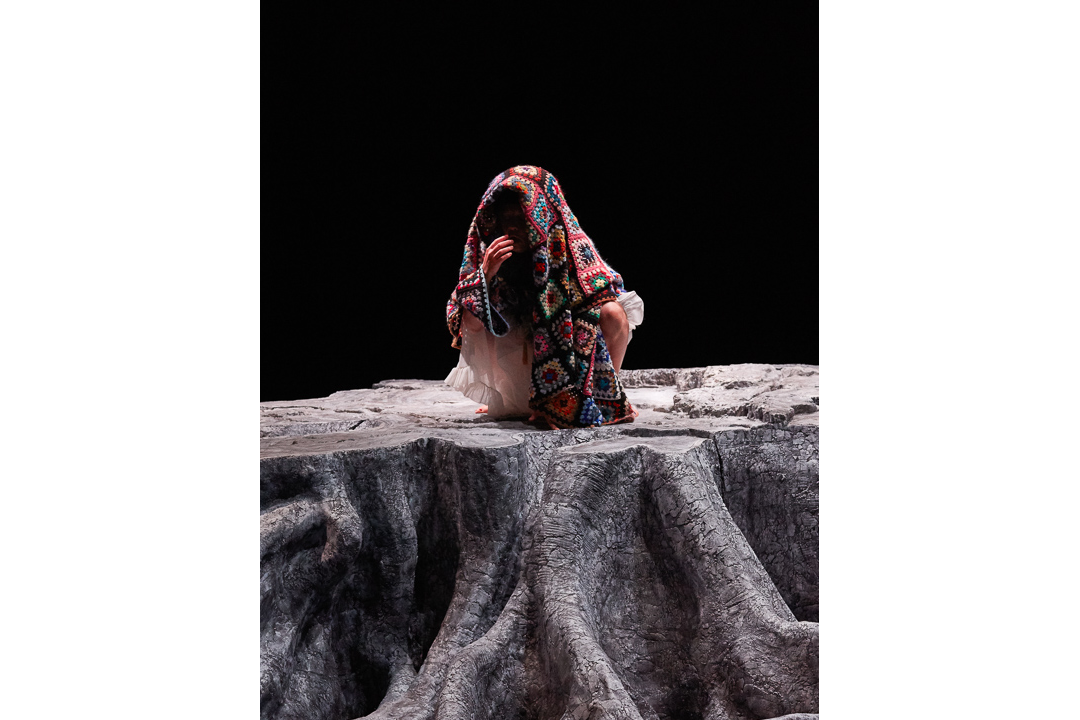 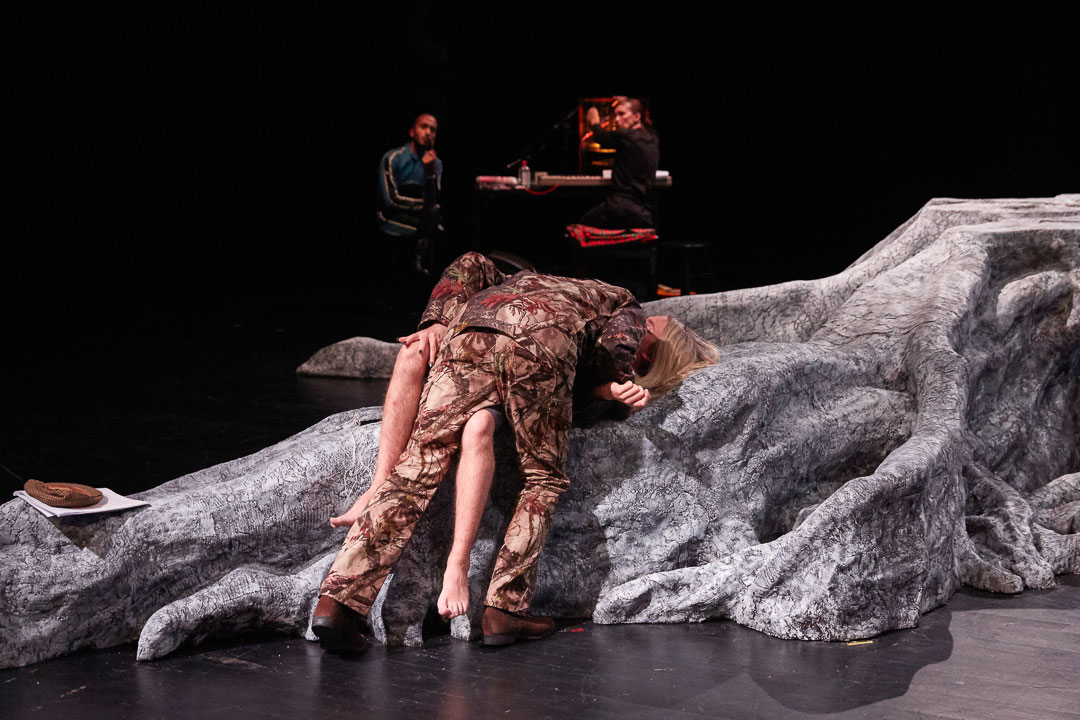 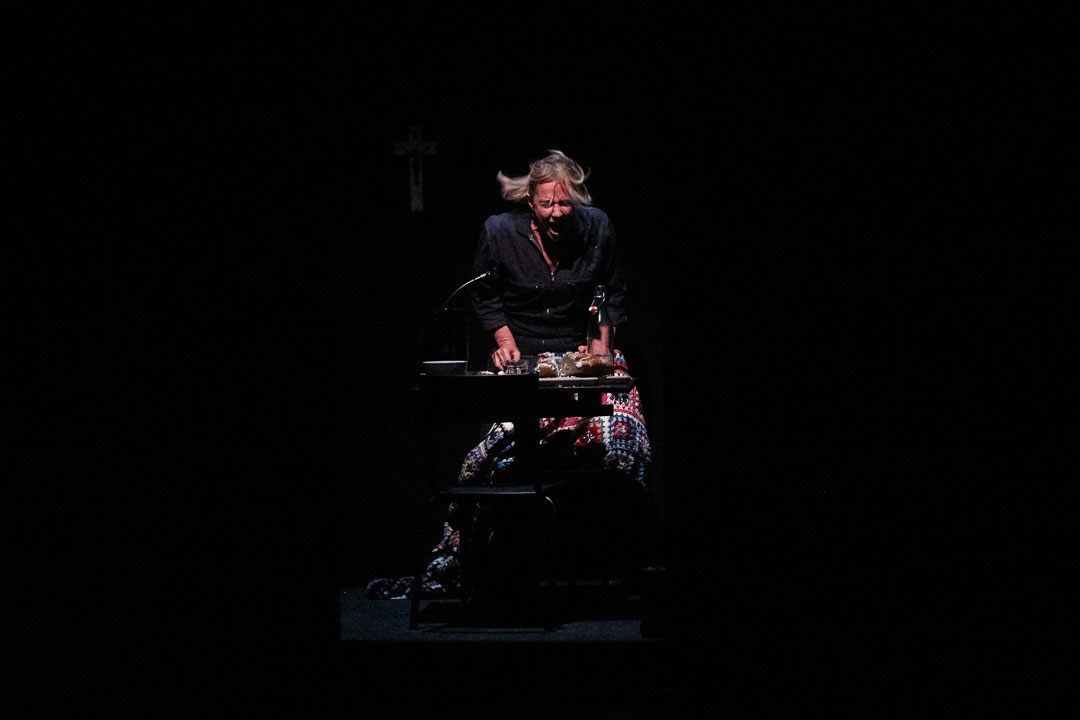 In 2008, I acted in a radio play directed by Jean Couturier that aired on France Culture. It was an adaptation of Georges Bernanos’s detective novel, Un Crime, in which I played the role of the Vicar of Mégère. At the time, I had been struck by this singular work, which explored questions of identity and the human condition through dark humour and emotion.

I was born in the Pyrenees, near Lourdes, where I spent my childhood and adolescence in a provincial village. From a very young age, I rubbed shoulders with these emblematic countryside characters, with their outspokenness and traditions. As a child, I still remember being fascinated by the impenetrable figure of the local priest, whom I would watch during weddings and funerals, or when many of them would march down the streets of Lourdes during the pilgrimages in August. These atmospheres and images are still alive in me. This tender and difficult relationship to the inland region resonates in my work, which has its roots in auto-fiction.

Georges Bernanos meticulously dissects the unique character of these remote territories and the personalities of their inhabitants. The character at the heart of the plot is atypical, to say the least. Hiding underneath her religious garb is a woman on a fatal mission, behaving in complete opposition to the principles and values normally extolled by Catholicism. The author uses the narrator’s voice – as well as all the voices of the different characters gravitating around the vicar – as his mouthpiece. At the risk of losing them, Bernanos allows his readers to freely carry out the investigation freely – as complex and impossible as this might be.

The Vicar of Mégère – embodied by this woman – wields a strange power of seduction and persuasion, provoking a certain chaos within a seemingly solid organisation. Each of the protagonists’ personal stories and flaws are revealed, and their feelings exacerbated. I’m thinking, for instance, of the young orphan who takes to the ambiguous figure of the transvestite adult, maintaining a tender and cruel relationship with him, as well as a near-maternal trust that pushes him to act dangerously.

I wish to stage this young transvestite woman’s role playing, with her troubled and endearing personality – a tragic heroine who pulls the strings of an empirical storyline, while arousing emotional confusion in the people around her. I want actors to navigate this “Bernanosian” maze by working on the multiplicity of roles being played and the different qualities of textual interpretation, oscillating between realism and exaltation. I like characters to be occasionally rocked by intense emotional shocks, and the border between reality, dreams, and nightmares to become paper-thin. I will also work on the way performers move on stage. Georges Bernanos very clearly describes every character’s physical energy in the novel.

Even though this novel flirts with fantasy and was written in 1935, it examines themes and timeless taboos that still spark deep questions within the performing arts today.

In my opinion, Un crime carries both a private and universal discourse within it that questions religion in an unique manner. Its implicit ambivalence and homosexuality create confusion – and the clothes in this case definitely do not make the man. The author invites us to take increasingly unsettling trains of thought that are far from the beaten paths of Christian morality. By questioning the operation of the different powers at play, the novel underlines the tenacious prejudices of a contemporary society, straining to achieve a certain normality.

It seems important to me to recreate the indoor and outdoor spaces where the action takes place. They act directly upon the intensity of the scenes insofar as they condition the characters’ behaviour, as well as their physical and mental states. The bedroom is often a space of intimacy, confession, reflection, dreams, nightmares, disease, and death.

Exterior spaces, like the countryside, represent a sort of wild escapade where the climate oscillates between bad weather, storms and sunny spells, accentuating the sombre and romantic colours of the different situations and tragedies that are being performed. Unlike a claustrophobic chamber drama, nature has the capacity to stimulate introspection. In order to reveal exterior scenes, I want to create movement between those played on-stage and their continuation off-stage.

The scenography designed by visual artist Nadia Lauro will essentially represent interior spaces. Moreover, extensive work on the sound and lighting will be implemented so that the audience can visualize the inside, or imagine the outside, via a zoom-effect, and be the privileged eye-witnesses of the characters’ private lives.